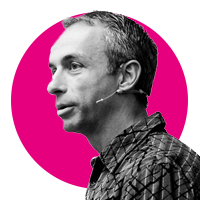 The Future of Product Visualization

Talk Abstract:
In this talk Henrik Wann Jensen, Chief Scientist and Co-founder of Luxion (makers of KeyShot), will discuss how product visualisation has evolved in order to handle the different demands of engineers, industrial designers, and advertisers.

Going from a 3D model to high-quality visual requires different capabilities to produce everything from technical illustrations to photorealistic images and animations.

Furthermore, the demands for realism has increased the need for detailed materials. This talk will explore recent research on a new material for rendering fabrics that considers, not only weave patterns, but also the yarns and the individual fibres making up the clothing.

Bio:
Henrik Wann Jensen is the Chief Scientist of Luxion (makers of KeyShot) and Professor Emeritus at the
University of California at San Diego. His research is focused on creating photorealistic images from 3D models.

His contributions to computer graphics include the photon mapping algorithm for global illumination, and the first technique for efficiently simulating subsurface scattering in translucent materials.

He has rendered images that have appeared on the front covers of the National Geographic Magazine and the SIGGRAPH proceedings.

He previously held positions at Stanford University, MIT, Weta, and Pixar. He received his M.Sc. and Ph.D. in Computer Science from the Technical University of Denmark.

He is the recipient of an Academy Award (Technical Achievement Award) from the Academy of Motion Picture Arts and Sciences for pioneering research in rendering translucent materials.

He also received a Sloan Fellowship, and was selected as one of the top 10 scientists by Popular Science magazine.