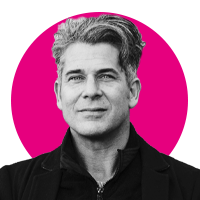 Using ocean waste to do good for mind and planet

Tom Lawton in an inventor who wears his heart on his sleeve.

Inspired by the national wave of pessimism surrounding the EU referendum and the decline of his beloved Gran into dementia, Tom was inspired to create the most beautiful thing he could imagine, and manufacture it here in Britain, aiming to restore spirits and bringing something positive to the world.

Tom believes that even the smallest actions can have great significance; his creation Uplift is a mediation aid designed to soothe the soul (with fans including Calm.com).

When his customers wanted something reminiscent of ocean waves he turned to waste fishing nets to manufacture the spiral – was it a risk worth taking?

Join Tom as he takes you through the journey of pioneering the use of waste nets and find out what it’s like to risk it all for a future you want to see.

As a product design graduate in 1998 Tom licensed his final year project, a recordable alarm clock, and manufactured over 250,000 units – selling through all major UK high street retailers.

He since pioneered mobile 360° video imaging, made a outdoor light powered by the wind, invented a long life safety light for runners & walkers that’s powered by motion and has starred in his own TV series ‘Tom’s Fantastic Floating Home’.

He spends his time consulting and striving to make a difference, devoted to his projects, Tom is the epitome of the Great British inventor: crazy enough to follow his passion, but determined and focused enough to make it happen.

His professional life has been a perfect balance of highs and lows, of inspiration and frustration and he knows a thing or two about innovation on a budget, dreaming big and not giving up!